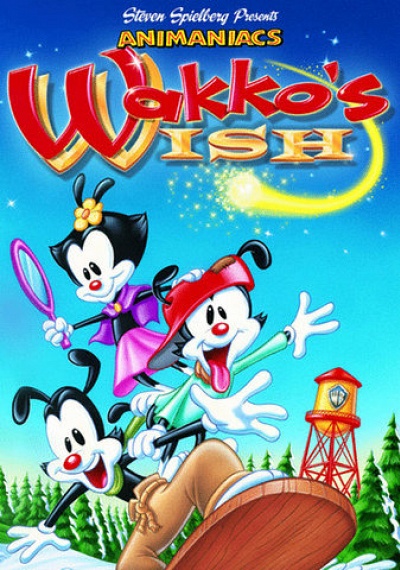 In 1993, the variety show Animaniacs aired on Fox Kids for the first time and quickly became one of the most popular and beloved cartoons of the decade. With its witty humor, strong characters and violent slapstick, this cartoon managed to last five seasons. It had 99 episodes, spawned two spin-offs, and their beloved songs are still used to teach kids today! So, to honor such an influential show, and with an Animaniacs reboot coming to Hulu in 2020, why don’t we take a look at their one and only full length movie… Wakko’s Wish.

The show Animaniacs is a slapstick, variety show, featuring a large cast of characters and segments, but the main focus has always been on the Warner Brothers. They are named Yakko and Wakko, and their sister Dot. Together they have wonderfully chaotic adventures, generally creating mayhem and terror in the lives of the people they meet. The movie puts all the shows wonderful characters in a magical world where Dot is sick and in need of an operation. In an attempt to save his sister, Wakko goes off to earn enough money to pay for his sisters operation, but is swindled as soon as he gets home by the evil baron. As a last ditch attempt, Wakko seeks to find a fallen wishing star to save his sisters life. However, others are racing to find this wishing star as well, and the star can only grant one wish.

Wakko’s Wish is one of those comedies that throws joke after joke after joke and hopes that something hits the target, and in typical Animaniacs fashion, if one joke doesn’t land, the next four will have you keeling over. The deliveries are pitch perfect, the characters are their typical wacky, witty selves, and the songs in the movie are both somehow sweet, and hilarious at the same time. People who lived in the 90’s or in a 90’s nostalgia kick will love this even more because there are a lot of pop culture references both in the show and in the movie. Ranging from famous celebrities to in-jokes, yet they don’t take away from the movie (or the show for that matter). It’s dated in the best way possible, where people who understand the jokes will laugh along with the people who don’t understand and simply love the out of nowhere humor of the characters.

The story is incredibly sweet, and the final scene of the climax will have you tearing up in both shock and sadness. Shock because the Animaniacs are making you cry, sadness because you can’t believe what is happening. You know it’s going to turn out okay, it’s a children’s cartoon after all, but your eyes just don’t listen to logic.

Sweet, heartwarming, tear-inducing, and falling out of your seat hilarious, Wakko’s Wish is a great movie to watch, especially during the winter season. If you haven’t seen it already, check it out on Hulu! It is worth watching at least once, and if you enjoy it, check out the show! It’s five seasons of breath taking hilarity, and definitely worth a watch.