The Bronze Age of Superheroes

Each era of comics is tied with the use of the Comic Code Authority. The Golden Age is before the Comic Code, the Silver Age is when the Comic Code had the most power, and the Bronze Age of Comics is when many rules from the Comics Code were retracted, bringing back many popular genres like horror, supernatural and crime. 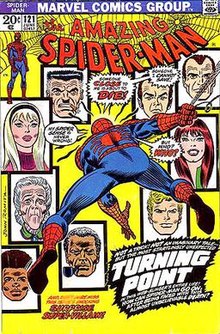 There was also a massive wave of fresh artists that grew up reading comics themselves to replace many of the pioneers and aging comic artists. Some of the new artists included Neal Adams, John Byrne, George Perez, and Frank Miller. Together, they began to take comics into a more realistic style in terms of both art and story.

The credit for starting the Bronze Age is given to the unexpected murder of Peter Parker’s girlfriend, Gwen Stacy, at the hand of the Green Goblin, which happened in the Amazing Spider-man #121 and #122. This started a trend of dozens of brutal murders of innocent characters, for example, the Flash’s wife, Iris West.

With the Comic Code Authority loosening its rules, and new artists taking stories into a more realistic style, creating its now typical ‘grim and gritty’ style, many stories in the superhero genre began to deal with darker topics. Along with death, you had Green Arrow’s sidekick dealing with a heroin addiction, and Iron Man coming to terms with his alcoholism. There were also politically loaded topics like racism, poverty, and government corruption like Captain America and the Nixon Watergate scandal. In addition, a slew of minority characters and superheroes, like Storm, John Stewart’s Green Lantern, Luke Cage, Black Lightning, Cyborg, and Blade, just to name a few.

As for more traditional characters, soon to be Marvel’s most recognizable character, Wolverine was created just before the start of the Bronze Age in 1974. In addition, before this era, comic characters were seen in relatively simple, and non-fitting outfits, but afterward characters began to be ‘oversexualized’ with tight fitted outfits and more defined muscles. You have characters like Red Sonja starting wearing the ‘breastplate,’ a metal bra to cover up female characters’ breasts and nothing else, while male characters like Conan the Barbarian went shirtless.

Comic books began to receive credit as a legitimate form of art and storytelling, most of this being contributed to the darker tone and look, but a huge part also comes from the help of Hollywood. When comics began to turn blockbuster movies like Star Wars and Jaws into comics. You also have the 1978’s Superman movie being a huge smash hit with both audiences and critics, further helping its case.

Despite all the success, audiences were starting to drift away from comics, creating a very fragile bubble. Merchandise became a huge part of comic companies’ bottom line, which would eventually lead to comics’ overall downfall in later decades. They also hoped to bring audiences back by reprinting decades-old issues and selling them as collections along with modern issues. The comic industry also had to keep the rising digital comic industry in mind, so they started to digitize old issues, making old comics easier than ever to find. But before all that, the era needs to end. There are many debates as to what ended the Bronze Age and started the next era, but most contribute the end of the Bronze Age to DC publishing Crisis On Infinite Earths. A 12 issue comic event, where DC would clear decades of inconsistencies, and bring together characters from the Golden and Silver Age.