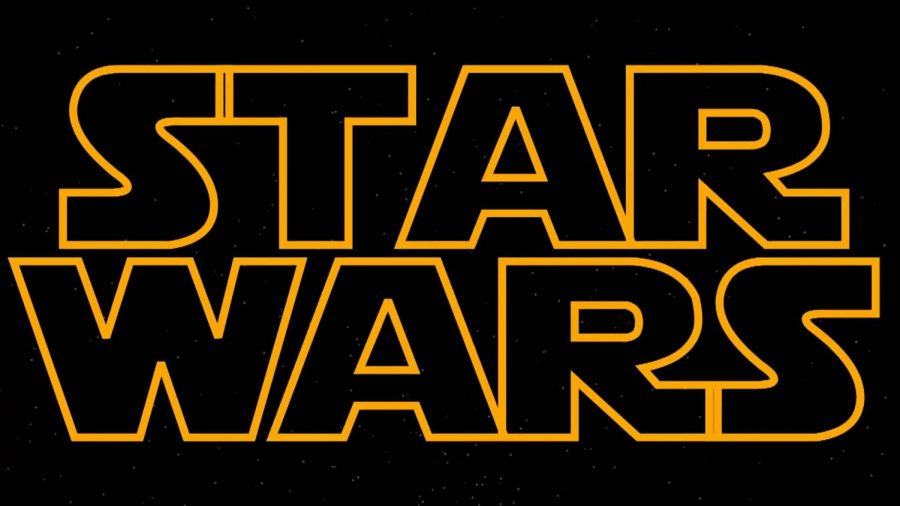 I know this is hard to believe,  but I have never seen the original Star Wars movies. Sure, I watched the Disney cartoon series Star Wars: Rebels, but in general, I’ve never seen any of the movies. They simply didn’t interest me at all. However, I was one of those people who watched Star Wars: The Force Awakens and I didn’t really get into it. But recently, I wanted to try watching Star Wars because they are considered classic stories with great characters. There has to be of something quality, right? Also, the fact many of the fan-favorite characters are villains and anti-heroes interested me. So, I decided to watch the original al Star Wars movies and review them. Let’s get into it!
Star Wars: A New Hope
I don’t think I have to tell you what the story is about. Everyone knows it, but here it is anyway. The story is about The Imperial Forces, under the orders of the cruel Darth Vader (played by David Prowse and voiced by James Earl Jones), holding Princess Leia (Carrie Fisher) hostage in their efforts to quell the rebellion against the Galactic Empire. Luke Skywalker (Mark Hamill) and Han Solo (Harrison Ford), captain of the Millennium Falcon, work together with the companionable droid duo R2-D2 (Kenny Baker) and C-3PO (Anthony Daniels) to rescue the beautiful princess, help the Rebel Alliance, and restore freedom and justice to the Galaxy. It’s a simple premise, and everyone has heard it after all, but I liked it… obviously. But for a very different reason than why other people like it, I liked it because it reminded me of a little RPG videogame adventure. A story with a pure-hearted protagonist (Luke),  with a cure little sidekick (R2-D2), who meets an established bad boi character (Han Solo), who goes through a crazy adventure in order to save a beautiful princess (Princess Leia), and is eventually captured by the bad guys (Darth Vader). Most of the characters were entertaining and I found that I was getting invested in the journey.

And yes, Darth Vader is one of the coolest villains in movie history. He is just a very intimidating character to me with his low voice, masked face, and heavy breathing. He basically steals the show whenever he shows up. The only thing I could complain about is that there is a lot of exposition throughout the movie but I am gonna excuse it because they really need to explain everything about how the world works. So, this movie is a fun, quirky, adventure that got me to continue the series.
Star Wars: Empire Strikes Back
Okay, when I said that the first movie was a pretty good beginning for the series, well Empire Strikes Back is a fantastic squeal!

I already knew that people love this movie but I was still really impressed with it. The adventure continues in this “Star Wars” sequel. Luke Skywalker, Han Solo, Princess Leia, and Chewbacca are attacked by the Imperial forces and its AT-AT walkers on the ice planet Hoth. While Han and Leia escape in the Millennium Falcon, Luke travels to Dagobah in search of Yoda. Only with the Jedi master’s help will Luke survive when the dark side of the Force beckons him into the ultimate duel with Darth Vader. I like how you get to see that Luke gets to grow up as a character and gets to actually trained how to use the force in order to defeat Drath Vader. It was interesting that the concept of the force can either be used for good and bad showing that it is not the power itself that is the problem rather than the person holding the power. There were some things that kinda get old real quick for me and the big one was Princess Leia and Han Solo’s side romance. It was kind of cute in the first movie but when they kept the “will they won’t” relationship and I just wanted to continue with what Luke was doing with exploring the force. Also as much as it is iconic, Master Yoda can be annoying for me just because of his voice. But I would like to ignore that and say everything else was awesome. I am not joking, everything else I really liked. I loved the space battles whether it was at the fighter jets or with the stand-off with Luke and Darth Vader, I was into all of it.

Side note, I played a game for myself to recognize all the memes and quotes in the movies that everyone knows, and that made it even more fun to watch. The big twist of the movie that Darth Vader says to Luke, “I AM YOUR FATHER!” was not as bad as I thought it was gonna be. It was kinda implied in the series that Luke’s father was an important person and it also showed that Darth Vader had a connection with Luke in one way or another. But the ending was still awesome. Luke was thinking of being on the dark side, Han Solo got kidnapped for not paying his debt and is now frozen solid, and it seems that The Empire has one more trick up their sleeves and all hope is being lost. At this point, I was thinking if I saw this in the theaters as a kid I would have lost my marbles. Little me would be begging my parents to watch it again in the movie theaters again. I liked this movie for how epic it was, and I can’t wait to see how this saga ends. 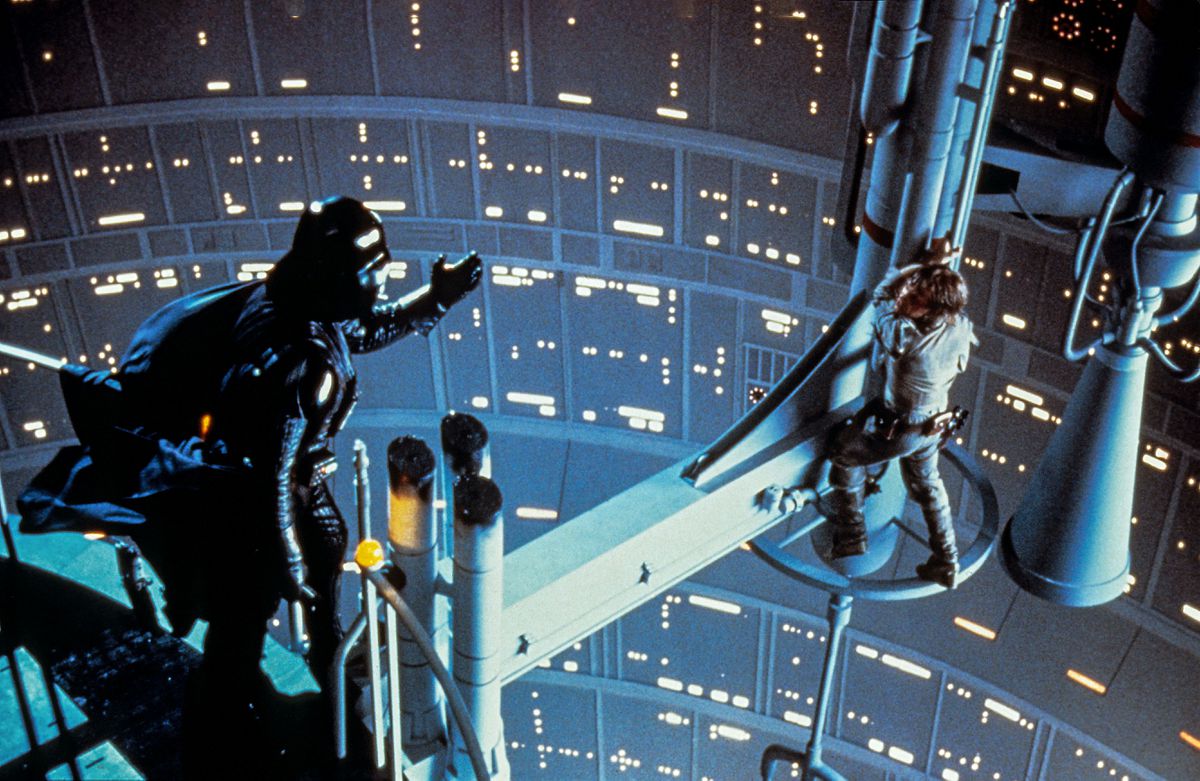 Star Wars: Return the Jedi
Well, this is the last movie of this trilogy, after that, there is the prequels, and the sequel series comes after. 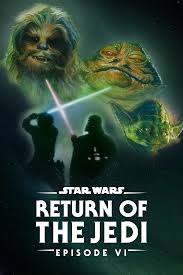 After watching this movie it felt like a good ending to the series. Luke Skywalker battles the horrible Jabba the Hut and cruel Darth Vader to save his comrades in the Rebel Alliance and triumph over the Galactic Empire. Han Solo and Princess Leia reaffirm their love and team with Chewbacca, Lando Calrissian, the Ewoks, and the androids C-3PO and R2-D2 to aid in the disruption of the Dark Side and the defeat of the evil emperor. I can’t say enough how much these series give a solid beginning and a solid end to this sega. It shows that everyone who worked on this really wanted this story to end on a good note. The stakes for this series made it really more entertaining to watch. I was invested in every plotline in this movie and was thinking the whole time, “how would that pay off?” or “I don’t want this person to die yet”. All the characters had an arc in the series and they all pay off for what they do to finish the Empire, even Darth Vader. When Vader and Luke had to fight in front of Darth Vader’s superior (Palpatine) while Palpatine trying to persuade Luke to join the dark side, it’s just was a great scene.

All of the action scenes are solid and fun to watch and kept you on your toes.  I would like to say that the story is great, the characters are iconic, but can I just say that C-3PO is like my spirit animal. He is just a cowardly robot that keeps likes to complain and gets scared too easily. I don’t know, I can relate to that way too much. It ends with everyone celebrating the fall of the Empire, Han Solo and Leia get together, all the people who were under the control of the Empire were free and Luke Skywalker gets to be satisfied when he sees the ghost of the people who helped him on his journey in father smiling happily. This movie gave me a really satisfying ending and a lot of endings in a series are not as good or feel rushed but this didn’t. I think that is why this one was m favorite in the series because how it was a good movie on it’s own and how better it is when watching the movies all the way.

So in conclusion, there is one word to describe the Star Wars series…iconic. These movies are that anyone can remember, from the world-building, the story, and the characters which perfect from every actor they all created Star Wars. I had a lot of fun watching these movies and I now understand why people like Star Wars. I think the reason why I recommend it is because this series is one of those movies that you need to see at least once. You don’t have to be interested in it but give it a fighting chance. If you choose to watch these movies, good luck, and may the force be with you. (HAHAHA why did I do that lol)