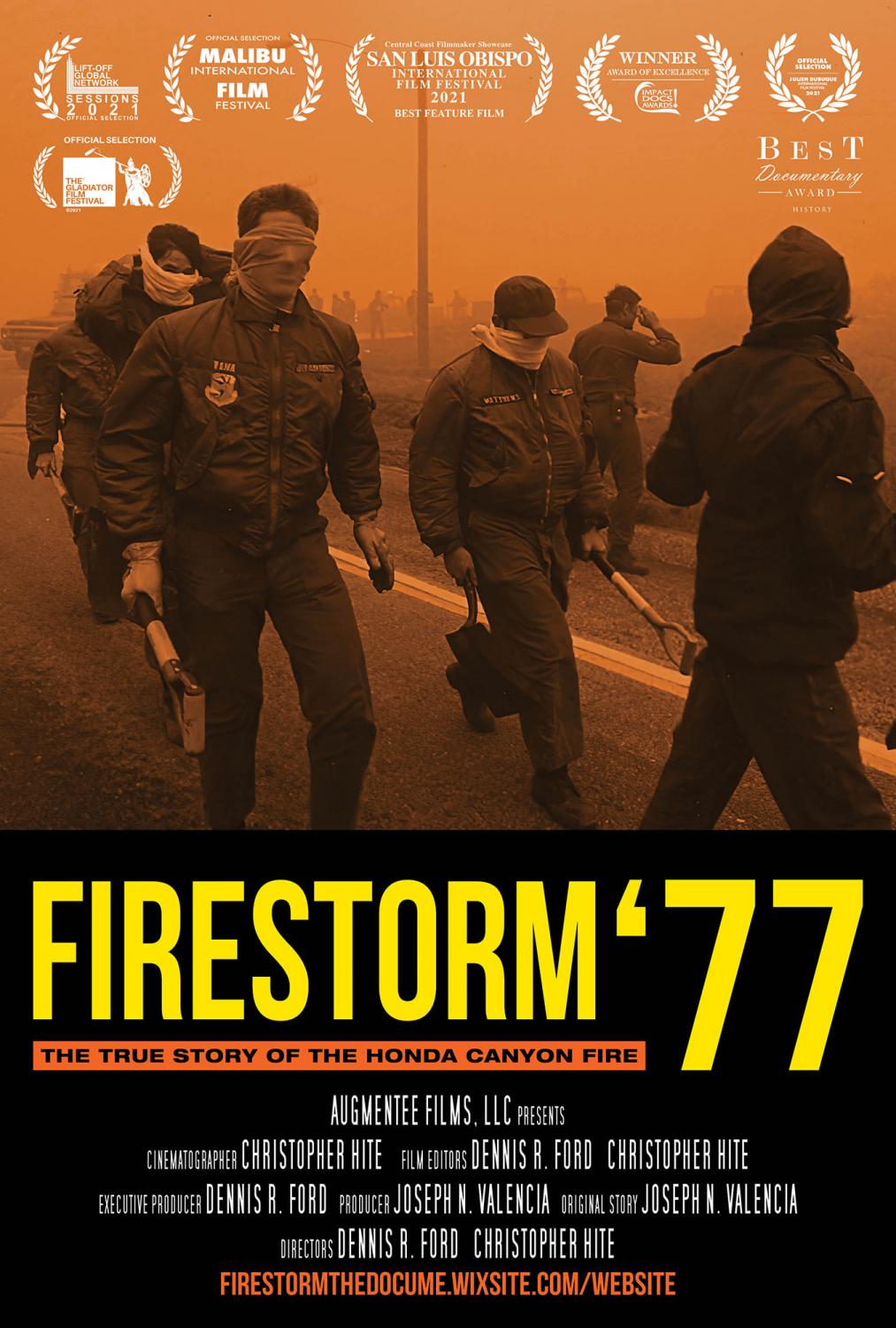 About the Film Firestorm ’77: The True Story of the Honda Canyon Fire

It is commonly known that our past experiences will shape the person that we are today. Each experience is not only predestined to result in a lesson that is learned by you, but by others as well. These important lessons in which deserved to be remembered, but usually, through time, are eventually forgotten and put behind us, never getting the real recognition they deserve. This is precisely what Dennis Ford and his crew do not want to happen with the devastating, local event that their documentary film, Firestorm’77, is solely based on: the 1977 Honda Canyon Fire.

The incident that the film speaks of took its toll at Vandenburg Air Force Base on the morning of December 20, 1977, forty-four years ago. With just the fall of an electrical pole following the creation of sparks, the combining factors of 100+ mph winds, and the prevailing Southern California drought would result in a raging conflagration that would leave many, including Dennis Ford, deeply affected by the occurrence. Ford has not only earned the title of Executive Producer, Editor, and Screenplay writer of the film, Firestorm’77, but also Former Augmentee Firefighter that had been present during the incident. He had been one out of the two hundred and fifty augmentees that were called out to the scene that night to risk their lives for the next twelve-fifteen hours at Honda Canyon. Ford states that he had, “never been trained to fight such a large fire,” and that he had not received any of the personal protective equipment he and others should have been subject to obtaining during the event. With this, Ford presumed that the other two hundred forty-nine Augmentees had been treated similarly, having had no prior experience concerning the dangerous situation they had been put up against. Although the initial idea for the creation of the film had gelled together in 2015 when Ford had met with Joseph Valencia (former Santa Barbara County Fire Department Reserve Firefighter that had been present at the same 1977 Honda Canyon Fire and Producer, Technical Expert, and Author of the film) and Christopher Hite (Allan Hancock College Professor of Film and Director, Cinematographer, and Film Editor of the film), the driving factor behind Ford’s eagerness to share the incident of the fire that happened ten-fifteen years previous.

On the occasion, Ford had met with a person by chance in which he shared his experience of being on the front lines of the 1977 fire. The person responded tactlessly, stating that he should not fabricate such a story, leaving Ford in disbelief. He tells us, “This flabbergasted me- the horrible event that I survived through was totally forgotten by the people in our local communities.” By means of this, Ford’s hope for the creation of the film is that the entire world will be able to know about the 1977 Honda Canyon Fire and the moral lessons that come of it. Ford believes some of the films that he likes and have inspired him (2001, A Space Odyssey; Lord of the Rings Trilogy; Silence; Kubo and the Two Strings; Apollo 11; etc.) gained his liking due to the morality tales they tell. He believes the notion of morality is consistent with his age and the cultural mores he grew up with. He knows that to achieve his extremely difficult goal of worldwide knowledge of the Honda Canyon Fire is to simply never give up and always take advantage of any afforded marketing opportunity. To do absolutely whatever it takes to push forward the message that “trained and educated Hot Shots should be placed on the front lines of catastrophic fires, not people that are ‘augmented,'” so future injuries and premature deaths such as the ones of Base Commander Colonel Joseph Turner, Fire Chief Billy Bell, Assistant Fire Chief Eugene Cooper, and fire bulldozer operator Clarence McCauley, can be prevented. On this note, it would be reprehensible not to mention that Ford and his film crew had named their company, Augmentee Films LLC, in respect to those who served at the 1977 Honda Canyon Fire. “Without hesitation or judgement, these survivors expressed profound loss and a deep seeded respect for those who had fallen. To me, this is the stuff of heroes: do what others won’t attempt–run into the face of fire and death–not judging those who have fallen before you.”

Like all film production processes, Ford and his crew did come across challenges when creating theirs. Ford states that “Because of the high costs associated with filmmaking, you are forced to be creative so you don’t have to pay for items/services that are super expensive.” To accommodate their budget, they did their best to self-create things such as their marketing materials and social media sites. A specific problem they encountered happened in regards to the footage they were going to put into the film. Since they could not film an actual wildfire and burnt landscapes, they resolved this by purchasing B-Roll to supplement the required fire scenes. He leaves us with a wise message that can be used to solve almost any problem: “The key is: one has to look at the problem and to devise an alternative methodology to get to the same goal.”

Recently, as of March 9th-14th, Firestorm’77 was presented at the San Luis Obispo County International Film Fest. The film has also made it into a number of other film festivals including: Malibu International Film Festival, The Gladiator Film Festival, Lift-Off Global Network Sessions 2021, and more, also having won the Impact DOCS Awards – Award of Merit: Documentary Feature Award of Excellence: History / Biographical (2021), and the Best Central Coast Feature-Length Film. To watch the trailer for the film click here and for their Facebook page click here. For more information about the film, cast, crew, and the company you can visit their website by clicking here, and if you were to be kind enough to help fund the film click here!

Dennis Ford and Christopher Hite continue to give us more helpful information on what advice they have for those high school students aspiring to be future filmmakers themselves. Regarding schooling, Dennis states that he is a firm believer in the Community College experience, especially if you do not know exactly what field in the film world you particularly want to be in. He adds that it allows you to have “a few more years to define what it is you want to be for the rest of your life,” and get the basic educational requirements out of the way without requiring you to spend a lot of money before entering the university system.

Hite suggests that when choosing what film college you want to go into, ask yourself a multitude of questions. Hite states, “Ask questions about the curriculum and equipment that is used, the cameras the editing systems. Do students make documentary films as well as narrative films? Is the program more cinema oriented or does it have a broadcast foundation? Does the program feature guest speakers and curated screening events?/ Ask if the program has any existing internship relationships. Find out when you can start using the equipment as a student—are first year students given access to the equipment or do they have to take preliminary courses first?” By taking these questions into consideration, Hite affirms that it can benefit you immensely professionally later on. The last and final words of advice Mr. Hite thoughtfully gives will only be subject to benefit the people that are willing to dive deep into their film passion and make their mark in the creative and versatile world of film:

“Eat, sleep, drink cinema. Watch films from the silent period through to the modern era. Study the structure of the film, the use of camera. Attune your eye to what the filmmaker is doing in every scene. Read books on revered directors and cinematographers. Experiment with any camera you can get your hands on. Study the technical aspects of cameras, but look at how cinematographers use them artistically. Look at fine art paintings from various eras to understand how light falls on subjects and to get compositional ideas. Attend film festivals. Now with virtual screenings it is easier than ever. Keep a journal of ideas you want to explore. It may take years to get to them all, but revisit it every so often and add to it.” —Christopher Hite, Allan Hancock Film Professor and Director, Cinematographer, and Film Editor.