My Trip to Seattle, Washington

On a random day in July my dad got a text message from my cousin saying that he was getting married and that my whole family was invited. The only thing is that We live in California while he lives in Washington. Up until about later September is when my mom and dad decided it would be a good weekend getaway from work and school. So that was the beginning of the the trip. The wedding was on a Friday so we left California the Thursday before the wedding. We first got packed up then headed off to the Santa Barbra Airport. As always with my family, we just had to be at the Airport 2 hours before our flight. TSA was a breeze, Checking our bags in was easy. This flight was an easy 40 minuets to San Fransisco. When we landed in San Francisco our flights were closely connected to another flight. So once we got to the gate, we just had enough time to get some snacks for the 2 hour flight we were about to have. We landed at the Seattle airport then took a bus to go get our rental car. We went to our hotel and set ourselves up then went out for dinner at a new places we have never been to. It was an okay restauraunt but still enjoyed. The day later the rest of my family showed up and we went to breakfast. there was about 16 of us at that point so getting a table was a hassle. Later that day was the wedding wee got all dressed up and looking dapper. the house was beautiful and the wedding was really fun and REALLY cold. All the dancing we did help a little bit haha. We went to back to the hotel around 9 but the party didn’t stop then, My family brought back a lot and went down to one of the other hotel rooms and had even more fun. My brother and I stayed in our room cause we were really tired. the next day was the day had the most fun. We woke up around 7:30 to leave by 8:30 to go to the heart of Seattle. We ended up booking tickets to go up the needle at 1pm. by the time we bought the tickets it was about 9am so had a bunch of time to kill. We decided it was a good time to drive around the city and we stumbled around a farmers markets and it was HUGE. we went and got off the car and walked the whole thing. Right next to the farmers market was the very first Starbucks that was built. The line was extremely long so we count go inside but the outside was really cool to look at. It was time to go to the needle and that line alone took us about 1 hour and 30 minutes just to get on the elevator to go up on the glass. When we got out of the elevator my brother and I were so flabbergasted by the view that it had to offer. It was so pretty and recommend going to Seattle JUST to go on the needle. We were there for about 20 minuets and then went back down to the ground.  Then we walked around and lost my other half of my family but it was okay because we needed up going off to take even more pictures. We went to a bunch of antique stores and looked at what they had and it was all beautiful and gorgeous. It was a very long and fun day. I was happy with how everything came out I loved the pictures and my outfit the most. going back to the hotel was a hassle as well The day after it was Sunday, The day we were leaving. We took back out rental car, went through TSA and all the other things needed to be able to go on the plane. the trips back were very long since we went from Seattle to San Diego. And from San Diego to Santa Barbra and from Santa Barbra to Santa Maria by Drive. If I were to go to Seattle again and had the chance I would take that chance in a heart beat and I think should consider too as well!! 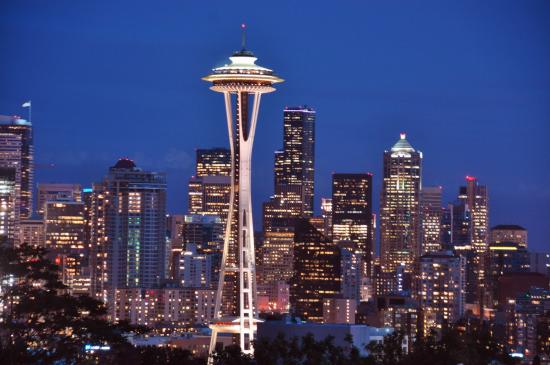